London Comic Con Spring is an annual event organised by Showmasters Events, serving as a branch of the Comic Con brand. The event attracts film buffs, gaming fans, and comic book readers alike to immerse themselves in a world dedicated to film and Pop Culture.

London Comic Con were seeing steady, growing success over the previous years with their events. They had primarily focused on growing their fan page and relying on organic reach and boosting posts to promote their events, and had amassed a large following on their Facebook page.

The problem they were facing, however, was in reaching new customers. They were looking to optimise their efforts on Facebook, not only so they could reach a wider pool of people who hadn’t heard of their brand, but also to make their ad spend more cost effective.

London Comic Con had spent the previous years building up a Facebook following through their pages. With the following of 133,000 fans they had amassed, they were using this steady stream of loyal traffic for ticket sales as a main marketing channel.

While this strategy has proved successful, they were looking for a new strategy that could really help them take ticket sales to the next level. It was at this point where they called in the help of Public Nectar, and we set about developing a strategy to help them achieve their goal!

We broke the strategy into three distinct stages – Top of Funnel, Middle of Funnel, and Bottom of funnel. 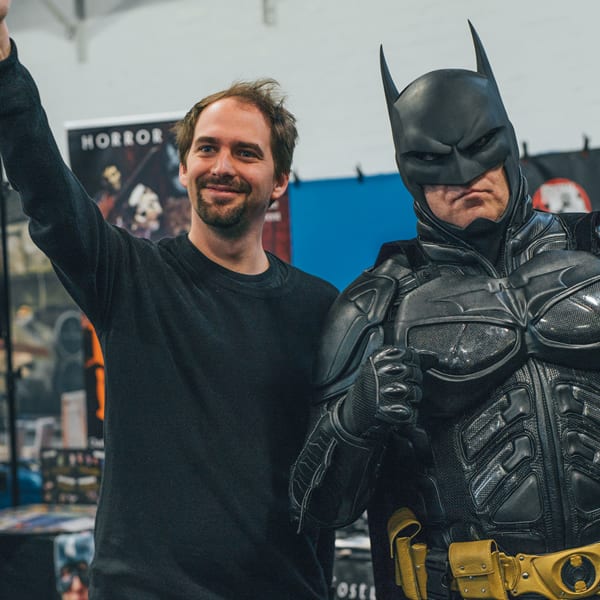 At the TOF stage, we were advertising to a segment of the target audience who hadn’t engaged with the brand before. With a large cold audience like this, the aim was to get as many users as possible to interact with the ads, and therefore enter the sales funnel to allow retargeting.

As with any campaign we run, we also conducted a testing phase on the ads to find out which were likely to bring the best returns. This testing phase is incredibly important, and can mean the difference between an average campaign and a highly profitable one.

The process we follow at the agency is called Graduation testing. This focuses on testing a mix of different creative, copy, and audiences. By doing this, it allows us as Facebook marketers to form an objective view on which ads are performing the best, rather than simply guessing. This helps to maximise the effectiveness of a campaign right from the outset, helping to generate a higher profit margin out of the ad spend. What’s more, we allocate a small percentage of the budget to continuous Graduation Testing, in an effort to ensure the ad spend is consistently and regularly optimised.

This effective testing process was seen in particular with our “See You Soon” images. These were eye-catching images with the caption “See You Soon” written in the middle. We initially placed these at the Bottom of Funnel, targeting visitors who had shown a clear intent to purchase. However, with our commitment to continuous testing throughout the campaign, we decided to try something different: We placed it at the Top of Funnel instead.

The results surprised us. While the “See You Soon” images were known to perform well at the BOF stage, we were shocked to see how well they performed at the TOF as well. Being among the ads that was generating the most amount of sales, we began to scale this vertically. By singling out this high-performing ad, we were able to bring down the overall cost per sale (CPA) by 43%, meaning they could acquire a customer with a much lower ad spend. 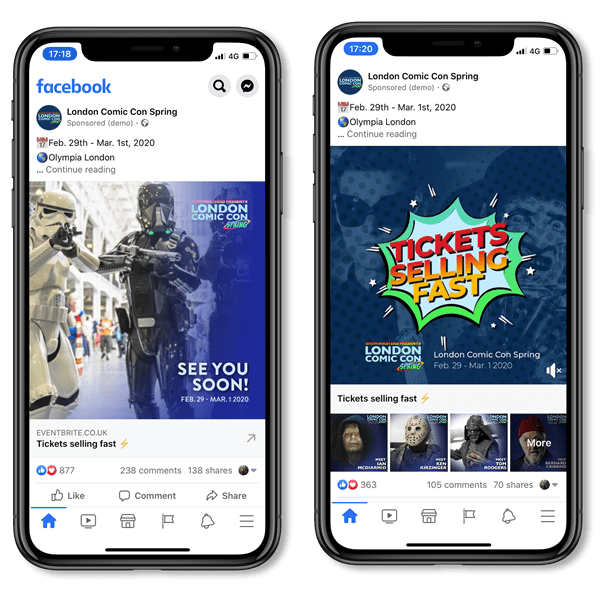 In this particular campaign, we wanted to test the effectiveness of “Collection” ads. These were part of Facebook’s “Instant Ad Experience” function within Ads Manager, allowing us to build a type of “mini-website” within Facebook. These kinds of ads offer an interactive experience for the user, and stand out in the feed more so than many other posts. With this kind of memorable advertising experience, it served as an effective initial touch point for new customers interacting with the brand.

We also made some changes to the technical side of London Comic Con’s Facebook advertising. While they were boosting posts before with moderate success, we saw an opportunity to increase this traction even more. While boosted posts are often able to reach a wide audience, they are optimised for engagement (likes, comments, and shares) as opposed to sales. Thus, while boosting posts is not a bad strategy, it is generally not the most cost effective

By switching to a conversion-based – rather than engagement-based – strategy, we noticed a strong uplift in their performance almost immediately. Naturally, the engagement on posts went down on average, however sales across the board rose. With growth of ticket sales and revenue being the ultimate goal for this event, the slight sacrifice in engagement was a trade-off we knew was important to make.

After introducing users into the funnel, the next step was to retarget them at the Middle of Funnel stage.

The MOF stage allowed us to continue nurturing users who had entered the funnel, steadily guiding them to purchase. At the MOF stage, the main aim is to build upon the connection the user has built with the brand by exploring different aspects not yet touched upon in the TOF ads.

For London Comic Con, this was done by going into further detail about which acts and guests were going to be attending the convention. As many of the attendees were likely to be meeting and greeting their childhood heroes at the event, it was important to highlight these acts at this stage.

Here, we used multiple ad formats to test out the performance of different layouts within the ads. Primarily, it was a mix of Instant experience ads, single image ads, and carousels. The unique nature of these kinds of ads in particular help them to stand out from other posts on the newsfeed. We then took this format and combined it with the well-known faces of the special guests for the event, and this proved very effective at grabbing the attention of scrolling users.

In order to leverage other pools of warm audiences at this step, we focused on targeting three main groups:

These provided huge audiences to target, with the added benefit that they were already warm. This helped us to achieve a more cost-effective strategy for the campaign, as we could introduce users at the middle of the funnel, rather than spending more money to acquire them at the top-of-funnel.

By the time users reached the bottom-of-funnel stage, they had already shown strong intent to purchase a ticket. Users were ready to buy, they just needed the final push.

To give them this push, we highlight the urgency of buying by using ethical scarcity tactics in both the copy we ran and the creative we used. The creative was an aspect of the BOF segment which gained a lot of traction, particularly with the use of “Tickets Selling Fast” videos. These were animated videos designed to promote the need to buy a ticket soon, while also keeping in mind the pop-culture themed branding. In particular for this event, the video featured a 3D effect for the text, something which caught the attention of many users within the newsfeed.

In order to stay top-of-mind for the customers, we intentionally set the frequency of the ads to be higher than normal. This would mean that they would show up more often in people’s feeds – something that was more and more necessary the closer the event drew. Particularly at the BOF, this need to stay top-of-mind was essential to help in prompting any final ticket sales.

Despite having worked on numerous events campaigns using Facebook, this campaign still surprised us with how powerful the platform is as a marketing channel…

By the time the event came, London Comic Con had spent £9,980.86 on Facebook, and returned an incredible £132,069.00 – a return on ad spend of 13.23x! This not only allowed them to see a massive growth in ticket sales for the event compared to previous years, but also allowed them to make their marketing much more cost effective. What’s more, by outsourcing the marketing to us, they could get hours of their time back in their busy schedule, so that they could focus on managing other areas of the event instead. 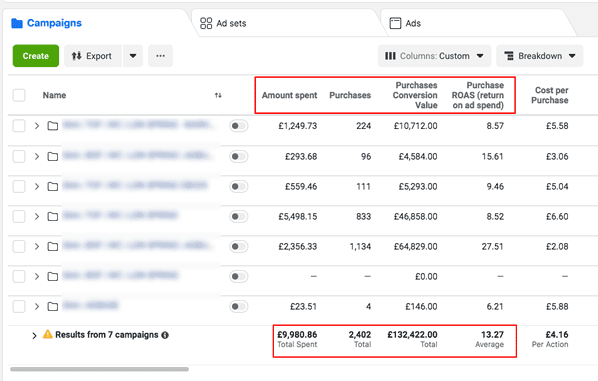 Results like these show that, with the right formula, Facebook can be an incredibly lucrative marketing channel for event owners. And at Public Nectar, we’ve developed a proven, scalable formula for event owners looking for massive growth

If you’re an event owner looking to see explosive ticket sales for your event this year, then don’t hesitate to book a free strategy call with us today!